Is Adderall the Same as Methamphetamine? 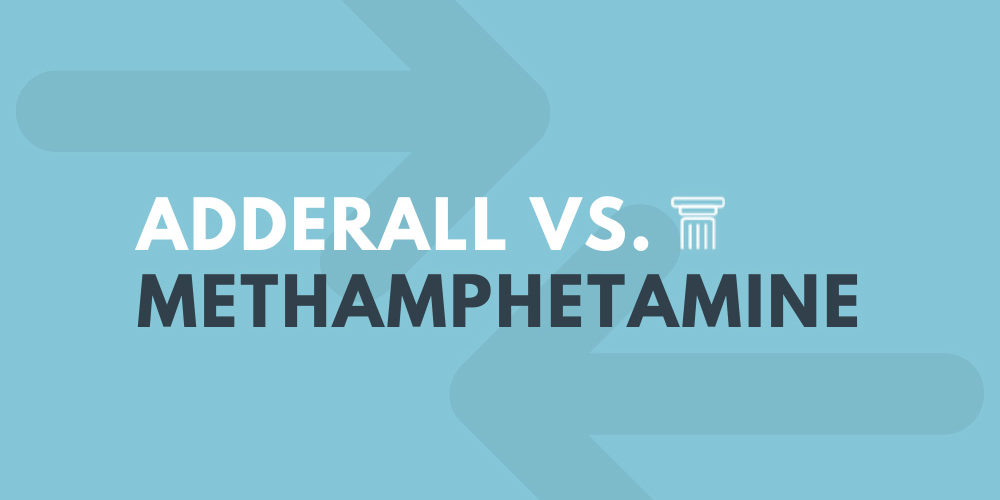 Doctors frequently prescribe stimulants like Adderall to help their patients with ADHD and narcolepsy stay mentally sharp, alert and energetic. When used as prescribed, Adderall can provide more focus and clarity to people with these specific health disorders. However, for people without ADHD or narcolepsy, using Adderall without a prescription is dangerous and illegal. Read on to learn about the effects of Adderall, its potential risks and its similarities to methamphetamine.

How Does Adderall Affect the Brain?

Adderall acts upon your central nervous system. It speeds up brain activity by increasing the amounts and availability of neurotransmitters called dopamine and norepinephrine. While this medication is in your system, it can relieve the disruptive symptoms of ADHD and narcolepsy.

When used correctly under a doctor’s supervision, ADHD medications like Adderall are unlikely to be habit-forming. However, if you don’t have a legitimate medical reason to use Adderall, taking this drug can be risky. There’s no conclusive evidence this medication has any benefits for people who do not struggle with narcolepsy or ADHD.

According to the National Institute on Drug Abuse, taking Adderall or other stimulants for reasons other than ADHD and narcolepsy can increase the chances of becoming physically or psychologically dependent. Potential unwanted side effects of Adderall include nervousness, headache, dry mouth, weight loss, dizziness, seizures, paranoia and a rapid or irregular heartbeat. Abruptly quitting Adderall can also cause uncomfortable withdrawal symptoms.

As stimulant drugs, meth and Adderall are chemically similar. However, methamphetamine is much more powerful than Adderall because more of the drug reaches a user’s brain. Meth also has more harmful side effects and a higher potential for abuse and addiction.

People misuse meth by smoking, snorting, injecting or swallowing it. While meth creates a rapid, powerful rush of good feelings, it also wears off quickly, leaving people chasing a high. Those who develop a tolerance will need increasingly higher doses to achieve the same effects, and as a meth addiction worsens, it can become all-consuming.

Nationwide, meth addiction has caused devastating problems for entire communities, causing higher rates of crime, unemployment and child neglect. Ongoing meth abuse can cause people to experience psychotic symptoms like hallucinating the sensation of bugs crawling under their skin. In some cases, meth-related psychosis can persist long after someone quits using. Additionally, brain scans of chronic meth users have shown several notable alterations in regions associated with learning, emotion, decision-making and memory.

Besides the neurological and behavioral consequences of methamphetamine misuse, long-term users also experience physical effects, including drastic weight loss and severe tooth decay resulting from poor nutrition. In addition to the typical “meth mouth,” many meth users also develop open skin sores from picking and scratching at the imaginary insects.

While the opioid epidemic has claimed the most headlines, meth is an ongoing public health crisis in America. If you are addicted to stimulants, you know how hard it can be to quit without help. At Pillars Recovery, we offer several effective, evidence-based treatment options for substance use disorders, including medically managed detoxification. Contact us when you are ready to learn more about how our programming can benefit you.